Editor’s Note:Youth is the most active and vital force in society. The hopes of a country and the future of a nation lie in the hands of its younger generation.

Under different historical periods, the environment under which the Chinese youth have growing up, the events they have experienced, and the opportunities they were offered are also entirely different. However, what has never changed is that they have always played a vanguard role in the quest for national rejuvenation.

The State Council Information Office of China on April 21 published a white paper titled the “Youth of China in the New Era” on the occasion of the 100th anniversary of the founding of the Communist Youth League of China. “The Chinese Dream is a dream about history, the present, and the future. It is cherished by all of the people, but even more so by the young,” it read.

In this vein, the Global Times recently interviewed Chinese people born in the 1950s, 1980s, and 2000s, who had varying experiences in their formative years, to illustrate the dream, the passion, and the beauty of different generations of Chinese young people.

The Beijing 2022 Winter Olympic Games will witness China’s younger generation shine on the global sporting stage. Many post-2000s athletes, including snowboarder Su Yiming in Team China impressed the world with, not only their excellent performances, but also their confident smiles and fluency in multiple languages.

“Living in what could be called the best times in Chinese history, the current young generation enjoys an enabling environment for development and a boundless space to grow,” read the white paper “Youth of China in the New Era.”

For the post-2000s generation growing up in a prosperous China with a rapid-developing economy with a blooming culture and rising international status, the generation represents individuals who are well-educated, experienced in world affairs, and knowledgeable, and have a natural sense of patriotism. They actively express their love for China in various ways, and are always ready to protect the interests of their motherland.

As they were growing up, most Post-2000s individuals were very clear about their social responsibilities. Far from the belief that a modern life will inflict depression on those who try it on, the Gen-Z generation has shown that their patriotism will remain unshaken even by the outside world.

While many Post-2000s individuals are just getting ready to pursue their dreams, some have already decided to safeguard the country and its people on the frontline, garrisoning in places far away from home and with prevailing environmental conditions that are inhabitable for most of humanity. 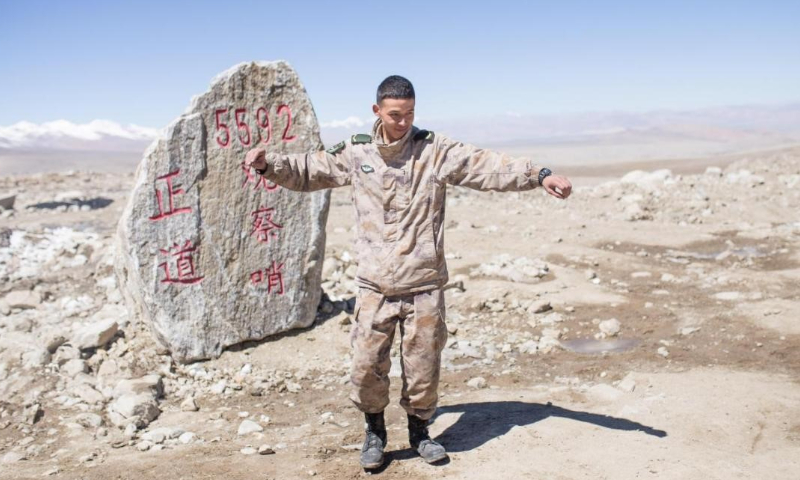 Rouzimaiti Tuerxun, a 20-year-old from Kashi, Northwest China’s Xinjiang Uygur Autonomous Region, appealed to serve at the “5592” observation point three months after he was enlisted.The observation point sits on a mountain peak 5,592 meters above sea level in Xigaze, Southwest China’s Xizang Autonomous Region, and is known for being the highest watch post for the People’s Liberation Army. In winter, the oxygen level in many regions the battalion guards drops to a meager 30 percent of that of other regions in China.